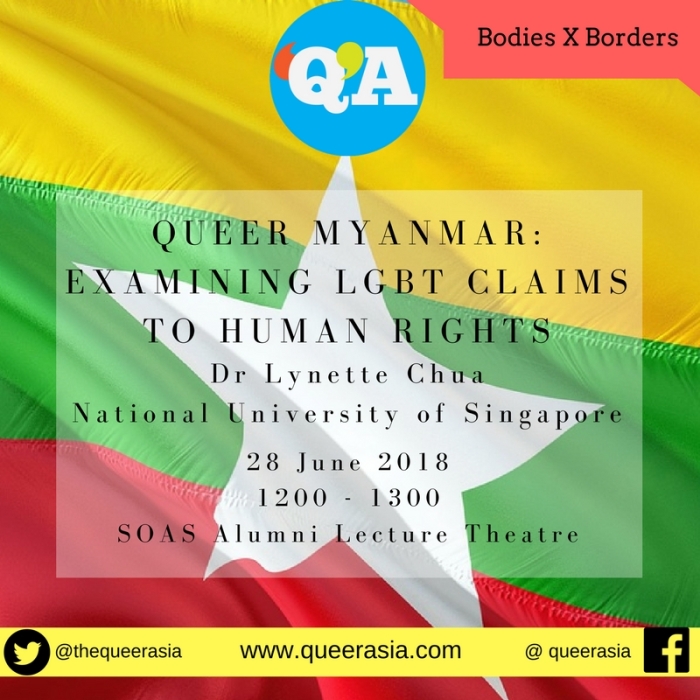 A little more than a decade since its founding, Myanmar’s LGBT movement joins the post-2011 political landscape of their country, where marginalized groups demand for recognition and rights. A movement initially made up of exiles and migrants, today its activists come from all walks of life. They are city dwellers, villagers, political dissidents, children of military families, wage laborers, shopkeepers, beauticians, spirit mediums, lawyers, and students. As their movement spreads across Myanmar, these activists make human rights claims in a society where the discourse was violently suppressed for decades, whose predominantly Buddhist population is unfamiliar with rights talk, and where queer people are morally suspect, much less recognized as people with legitimate grievances. How did Myanmar’s LGBT movement emerge? How do LGBT activists of the movement make sense of human rights and put them into action, that is, practice human rights? What can others learn from it? In this talk, Lynette Chua discusses the legal and social challenges facing queer Burmese, the LGBT movement’s development, and its efforts at using human rights to empower queer Burmese to accept themselves, gain social belonging and strive for legal reform together. She also reflects on the results of their efforts, and its takeaways for movements and human rights practitioners elsewhere. The talk is based on Chua’s forthcoming book, which offers an ethnographic account of the LGBT movement’s human rights practice before, during, and after Myanmar’s post-2011 political transition.

Dr Lynette J. Chua is the author of The Politics of Love in Myanmar: LGBT Mobilization and Human Rights as A Way of Life (Stanford University Press, forthcoming) and Mobilizing Gay Singapore: Rights and Resistance in an Authoritarian State (Temple University Press, 2014). She is Associate Professor of Law at the National University of Singapore and a socio-legal scholar whose research focuses on rights, social change, and social movements.