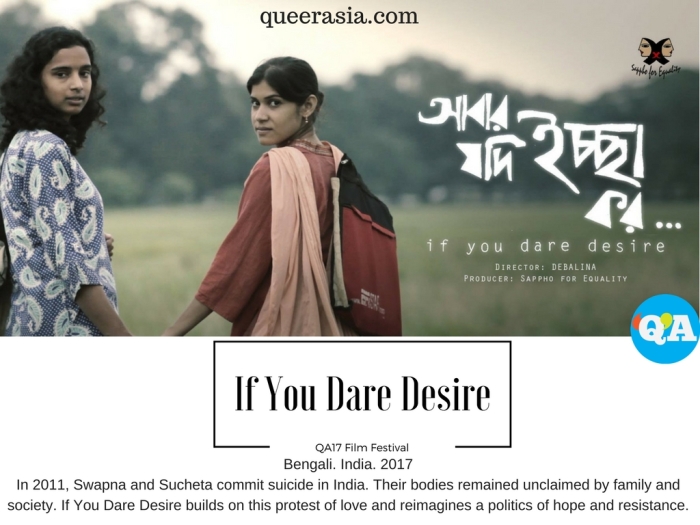 February, 2011. In a small village of West Bengal – Swapna and Shucheta – two young women in love with each other – took their own lives, leaving a letter claiming love, life, recognition… a letter challenging violence, hate, invisibilisation. No one from their families came to claim their dead bodies. They died as they dared to love. Their bodies remained unclaimed by family and society. What if they were not dead but alive today?
Like many other couples, Aparna-Kajlee from Bongaaon, Moyna-Bandana from Purulia… They died for love but still live among us. What if Swapna and Shucheta ran away and survived? How would their life together look like and their desire?
If you dare Desire, is a film of possibilities. Beyond the domination of patriarchy and hetero-normativity, the women in love resist with their bodies, with their hearts. They live many lives. They die many deaths. They resist and they dream. In the daily struggles of a far-away village. In the dark glitters of a big city….

Debalina is a filmmaker and cameraperson. She studied Comparative Literature at Jadavpur University. She has worked on feature length documentary films, short films, travelogues, music videos, corporate films, telefilms and experimental films. She is passionate about environmental issues, gender, sexuality and occasionally writes for newspapers and magazines.

Based on the story of two lovers who committed suicide, Debalina’s upcoming film “… ebong bewarish”(“…and the unclaimed”), questions social taboos and familial non-acceptance in regards to same-sex relationship.