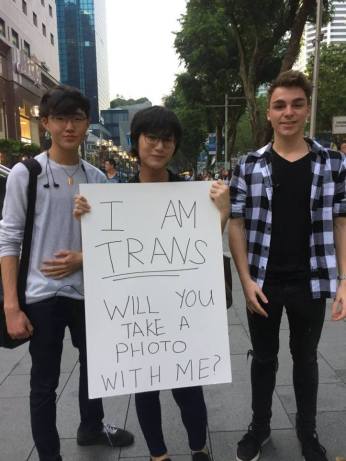 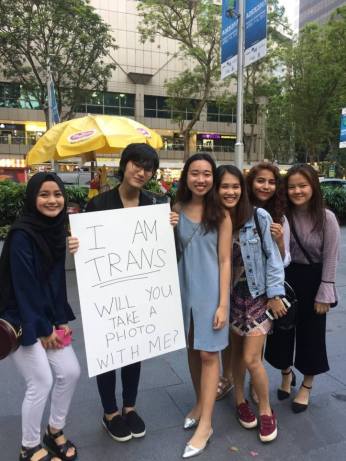 With the enforcement of the Public Order Act, public displays of resistance in Singapore have been restricted to peaceful, state-supervised events at areas such as Hong Lim Park, a designated area of protest. The Public Order Act regulates the conduct of individuals and groups when they are in public. At the nexus upon which LGBTQ+ resistance manifests, various issues have been widely contested. These include:

Having been a part of this resistance in various ways, most notably when I walked along Singapore’s main shopping district, Orchard Road, with a placard that read “I am trans, will you take a photo with me?”, I too have ostensibly bowed to the principle of non-confrontation. Onlookers had the choice to engage with me or ignore me. It was interesting to watch as people chose to interact with me disapprovingly, their brows furrowed; frowning; giving space. It is only when we claim this space however and the right to exist, whether publicly or otherwise, that resistance draws attention. Consequently, this leads to eventual normalisation.

Non-confrontational LGBTQ+ resistance however has been mirrored by a conservative backlash, one that has be . The iconic Wear White movement, for example, is one case of counter-resistance to the local pride movement, Pink Dot. This concerted, conservative, effort has sought to preserve the status quo  of heteronormativity – a direct response to existing LGBTQ+ resistance in Singapore. Yet LGBTQ+ resistance in Singapore is gaining steam, as demonstrated by the growing size of and support for Pink Dot that gathers annually those who support gay rights, despite recent government intervention that prohibits foreign funding and participation of the event. The growing awareness surrounding queer arts festivals like IndigNation, increasing relevance of support and counselling centres like Oogachaga, as well as widening resources by and for LGBTQ+ individuals in Singapore also testify to this fact. The way that LGBTQ+ resistance has been and is evolving in Singapore means that there will be an ever-increasing number of opportunities for awareness and integration. We have begun to claim our places more visibly, and that is one step towards equality.

Cassandra Thng is a trans activist in Singapore whose personal activist work has been featured by news publications. She is also currently serving as PR director for the Inter-University LGBT Network, and is part of the transgendersg.com team. She is attempting to join queer women’s group Sayoni in the upcoming CEDAW cycle.