In May 2017, Jinsil Lee and I organized an exhibition titled Read My Lips at the art space, Hapjungjigu, in Seoul, South Korea. Themed around “drag” as a concept, an important term in queer politics, the exhibition gathered and exhibited queer artworks. Drag often refers to the play and practice by sexual minorities of putting on the costume and exaggerating the gestures of the opposite gender. However, the exhibition explored drag in a broader sense, following Renate Lorenz’s theory which stated that “drag may refer to the productive connections of natural and artificial, animate and inanimate, to clothes, radios, hair, legs, all that which tends more to produce connections to others and other things than to represent them. What becomes visible in this drag is…an ‘undoing.’” [1] From this perspective, the artworks in the exhibition were read as figurative attempts to transcend and transform in-between male and female, things and human, everyday life and art, and the white cube and subculture. They included paintings by Yongseok Oh and Eunsae Lee, drawings by Bob Kim, sculptures by Mire Lee, an archive by Dong-jin Seo, performance bu Ibanjiha and Sungjae Lee, and internet radio broadcasting by Rita, as well as and extensive exhibition catalogue.

“For the queer is a lack in the coherent and it makes others look at the very lack by excavating something queer.”

After the exhibition opened, we received various comments and reactions, including interest, excitement, and doubt. The exhibition was based on meticulous observation and minute conceptualization of drag and queerness, which was originally formulated in the West. One could say that such subtle theorizations might be too early for Korean society. The slogan of Korea Queer Cultural Festival in Seoul (Seoul Pride) in 2016 was “Queer I Am,” which called for the recognition of queer people in Korean society. The slogan paradoxically proves the absence of queer presence in Korea and thus the urgency of this issue. To borrow Elizabeth Freeman and Lorenz’s theory on the queer space and the queer time, the queer practice and theory in Korea is at the level of discussing only the queer space. In other words, Korean society does not see the queer because it does not know it. This also holds true to queer art: the Korean art scene does not make queer art because it does not know it. In this circumstance, even if one acutely appropriates Lorenz’s concepts of the radical drag, the trans-temporal drag, and the abstract drag, they are comprehended only as abstruse and ambiguous notions without materiality and substantiality. Discourse on the queer and queer art has no anchoring point in Korea. This becomes a reference as well as an obstacle to curators and viewers, and this might be the source of the discomfort one might feel in front of the queer works of Read My Lips. 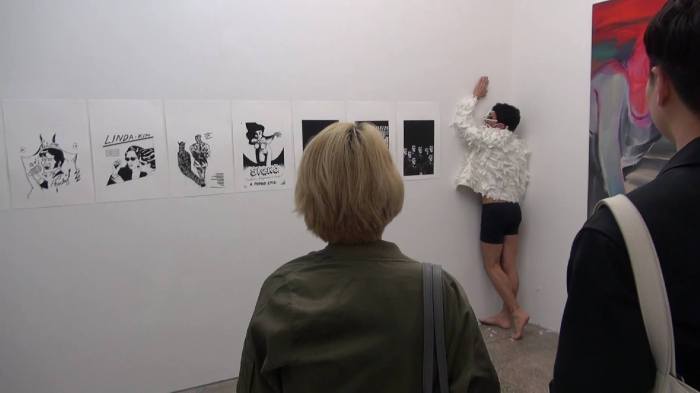 The discomfort is also related to the fact that queer aesthetics can be misidentified with contemporary art. As Freeman points out, “[q]ueer theory… pays attention to gaps and losses that are both structural and visceral… Queer theory also describes how specific forms of knowing, being, belonging, and embodying are prevented from emerging in the first place, often by techniques that intimately involve the body.” [2] Contemporary art also focuses on gaps and losses that have been neglected in the grand discourses and everyday life. Both queer theory and contemporary art are attracted by the unreachable Real and imbued with the pursuit of the Real. Thus, if one does not equip with keen eyes, the subversive power of queer art can be merely read as the revolutionary and resistant nature of contemporary art. And such an affinity often lets the viewer to misrecognize the discomfort from a queer artwork as the uncanny from a contemporary artwork. Nonetheless, the awkward, uncomfortable feeling you might have in front of an inscrutable image is something truly queer. For the queer is a lack in the coherent and it makes others look at the very lack by excavating something queer. Therefore, the idea that one cannot easily comprehend the queer exhibition, but rather only has an uncomfortable and awkward internal response to the exhibition, serves as an index for the absence of discourse on the queer in Korea.

The otherness of the queer would lose its subversive character when admitted into the comprehensible, coherent system of recognition and perception. It is because the others become different types of subjects. It might be the fate of all others. Even so, Read My Lips wanted to pull out a discussion on the ‘queer’ in Korea. We hope that the exhibition has spurred various queer practices and discussions.

Camille (Ji Eun) Sung is a PhD student in Art History, Visual Art & Theory at the University of British Columbia, Canada. Her current research explores experimental and performative art, particularly in postwar Korea and Japan. As a former queer feminist activist drawing from her background in aesthetics, Camille also has worked on the materiality of art and movement. She can be reached at camille.j.sung@gmail.com.

*The essay is an excerpt of my essay “D-r-a-g the Drag,” published in the exhibition catalogue.

About the blog series What is ‘Queer’ in South Korea? Explorations of art, identity, and ‘queerness’ :

Drawing from the diverse perspectives of a curator, artist, and podcast host, this blog series investigates the categorization and perception of queer art in South Korea. It is being curated by Amy Kahng, an emerging curator and art historian. Her research interests include contemporary art of Asia, Korean video and performance art from the 1960s-90s, and the intersections of queer theory and art history. She is based in Los Angeles and Seoul. She can be reached at askahng@gmail.com

Other blogs in the series: