The work I have been most inspired by draws unconventional links between social contexts, historical periods, and disciplines. William Connolly’s (2008) work, for example, finds parallels between discourses of the evangelist right and US capitalism. Paul Amar’s (2013) The Security Archipelago looks to Cairo and Rio de Janeiro to find similar securitization discourses around particular gendered and classed subjects. Donovan Schaefer (2018) explores the affectivity of secularism, complicating the clean division between religious fervor and scientific ­dispassion.

My experience at ‘Queer’ Asia 2018 provoked similar questions. During the opening panel, Geeta Patel did this by bringing the notion of bacteria into the conference theme of bodies and borders. Evoking Foucault’s biopolitics, she asked how we turn dirtiness into cleanliness and exterminate, using not only language, but also more literally. She referred to a visit to the hospital where this link became resonant, discussing the automated mechanisms and logics which have us turning to anti-bacterial ointment to remove the bad bacteria and probiotics to usher in the good ones. 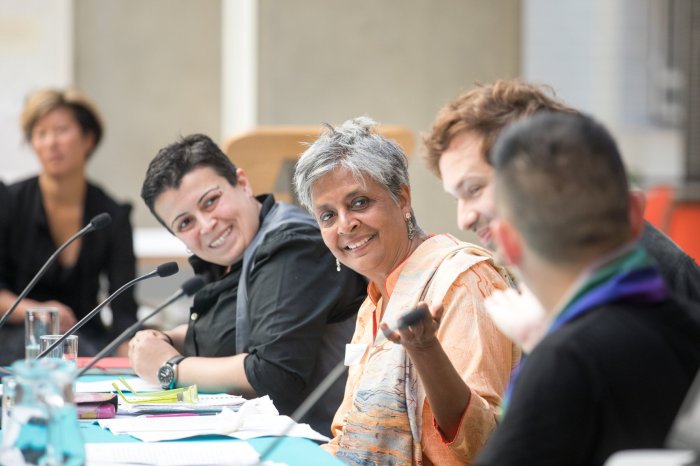 This metaphor about a hospital nurse compulsively disinfecting her hands became a metaphor for the everydayness of political projects, colonial and otherwise. Patel also reminded the audience that the word “normative” is a statistical term, and urged us to think about what it means to use it as a descriptor. I think that it is partly Patel’s background in the sciences which provokes the kinds of metaphors that draw three-dimensional lines between frameworks we think of as disparate. It reminds me of the gracious, curious orientation of Eve Sedgwick, whose work on affect was a major contribution to queer theory.

This metaphor about a hospital nurse compulsively disinfecting her hands became a metaphor for the everydayness of political projects, colonial and otherwise.

Affect theory, for me, has become a way to talk about what, as Deborah Gould has remarked, is “often experienced at the very edge of semantic availability.” Schaefer has also noted that “[a]ffect theory’s project is to question the extremely tight fit between language and power.” It’s a way to think about that which is inextricably linked to cognition and language, but which we don’t have very precise words for yet.

Eve Sedgwick herself was inspired by the work of psychologist (and something of an interdisciplinary curiosity) Silvan Tomkins who drew from a range of disciplines to inform his theory of affects and later script theory. At the University of Pennsylvania, he would study playwriting, psychology, and philosophy, going on to run a series of experiments on facial expression which would likely have both the humanities and the social science camps puzzled today (and likely even then). But what he produced from those experiments was a freeing idea. Rather than an infinite number of affects, or some kind of binary state of affect/non-affect, his experiments led him to form a framework of nine affects.

Sedgwick later took this work and used it to intervene at a time when the high humanities tradition was questioning whether science could actually do what it claimed. She waived a white flag on behalf of the former and asked just what might happen if these perspectives met. Putting aside whether there were in fact nine affects (or more, or fewer), Sedgwick championed an ability to think between infinity and the binary, making it an important component of not only queer theory, but for virtually all disciplines.

She understood just how difficult it is to “unthink” a paralyzing binary (freedom/oppression, hegemonic/counter-hegemonic, public/private, normative/nonnormative) and suggested that we wade into other disciplinary buckets to see just what we might find. This was what she called operating within the middle ranges of agency—existing within a space where there is less to know or claim for certain, and even thriving there. It seems like a simple thing, but what it did was give us something graspable to work with. Having a finite number of elements, but also more than an on/off switch, dislodges us from the kind of paralysis we often encounter when thinking about power, especially in the contemporary moment. I think this can do much to alleviate what feels like a paralysis of the right now.

This is something I thought about in relation to my own work throughout the conference. Just before my panel, I got into discussion about my research into the crackdowns around the Lebanese band Mashrou Leila in Egypt and Jordan within the last few years. The band has been banned from performing in these spaces amidst controversy and panics around the lead singer’s sexuality (he is openly queer). I’ve been curious about not only the way the band has been celebrated by Western outlets as something of revolutionaries, while they have been barred from playing in several spaces in the Arab world. I’ve been looking at not only the way that dominant discourses in Egypt and Jordan construct homosexuality as inauthentic to the region (because this is not a new narrative), but the way it has become an issue of national security. At once, these minority bodies have been simultaneously hailed by those in the region as symbols of pride, but also as anxiety-provoking, both through an affectively charged link to the “global.”

I’ve been curious about not only the way [Mashrou Leila] has been celebrated by Western outlets as something of revolutionaries, while they have been barred from playing in several spaces in the Arab world.

One participant asked me whether those in the Egyptian community identified as queer or homosexual. Or alternatively, did they identify as something else altogether? Questions around language are important ones, and it’s especially critical to understand the nuances of particular identity formations and the material effects they have on the way that we live in and experience the world. But in thinking about how to answer, I also thought about what Chris Nickell called “the absurdity of speaking for (and to) an entire region at once in the crosshairs and in the spotlight” (p. 9). He was referring to remarks by Mashrou Leila lead singer Hamed Sinno to the audience at a US concert following the Orlando shooting at Pulse Night Club, where he called attention to the impossible spaces occupied by those at the margins: “This is what it looks like to be a terrorist and a faggot.”

“This is what it looks like to be a terrorist and a faggot.” – Hamed Sinno

I now realize why my initial question of whether a queer space was opening through the globalization of this band and their performance sites was not a question I was comfortable with answering, and one I had not really been trying to answer. What would it mean to say yes or no? Perhaps it is a worthy question for someone to answer, but to say that Egyptians authentically identify using the words queer, homosexual, gay, or mithaliyin, or whether these spaces are queer or un-queer, feels in some ways like it is falling into the trap that I am trying to evade.

In recognizing the disparities and power imbalances intensified by colonialism, postcolonial theory has given us vital tools to name those dynamics and try to highlight, understand, reverse, archive, fight, and move beyond them. And while it is important to recognize these differentials, it is even more important that we don’t risk reaffirming them. I think here of work which, in its quest to uncover these legacies, ends up constructing the colonial and colonized as part of a global/local, authentic/inauthentic binary, whereby all those who identify with broader collectivities risk being labeled foreign, deviant, or the output of penetrating, imperialistic projects. As I think of the recent crackdowns in the Arab region and beyond, I remember that there is great violence associated with this kind of posturing.

So while we are examining these disparities, we must at the same time recognize our convergences, shared realities, and the interconnections among the global phenomena we are experiencing. I am thinking of Marwan Kraidy’s recent work calling for attention to these interconnections, and I would add that it is perhaps through attention to affect that we might have the tools to do so. There are also other ways of producing knowledge about the things we consider worthwhile, and I think those can be discovered through gracious and curious exchanges of knowledge between historians, statisticians, playwrights, neuroscientists, economists, psychologists, artists, and other theorists and practitioners.

For all of us who find ourselves steeped somewhere between the humanities and social sciences, I would say that this is perhaps the most productive place we can be right now. As Schaefer has noted, we would do well to consider the way that producing knowledge feels, not only for academics, but in our day-to-day, as humans. I do not yet have a solid answer for what that looks like for my own research, or what unconventional places I may turn to, but I imagine that this is something that takes time and effort to cultivate. And a lot of gracious curiosity.

Heather Jaber is a researcher from Beirut and Boston. She holds an M.A. in media studies from the American University of Beirut (AUB), where she studied the emerging visibility of characters coded as homosexual in Lebanese musalsalat, or Arabic-language television dramas. As a doctoral student, she is interested in the intersections between gender, sexuality, popular culture, and geopolitics in the Arab world and beyond, and particularly in interrogating the symbolic function of deviance in the construction of the nation.

Read More about the upcoming CARGC-fellows biennial conference, “Popular Culture and Coloniality: Decolonizing Global Media and Communication” at the University of Pennsylvania on March 28, 2019. Interested participants can send their abstracts by September 15, 2018.