Posted on 20/06/2018
Showna Kim is participating in the Bodies X Borders Art Exhibition, as part of the ‘Queer’ Asia Conference 2018. See more here

But at some point when I was abroad, I realised that I only thought about myself as a human, not with a split identity that divided queerness from humanness.

What experience or education led to your artistic practise? Could you briefly explain your trajectory?

I worked as a designer and Visual Merchandiser in Korea for over a decade but I felt dissatisfied with the limitations of making commercial work, so decided to study abroad and pursue a fine arts degree in Nottingham, England. I really wanted to merge graphic design and fine arts by experimenting with and pushing the limits of material in my work. From there I studied and worked in England for over 8 years before I returned to Korea, where I became director of an alternative art space in Seoul. I still reside in Seoul where I develop my work and exhibit internationally.

Could you describe your work, ‘AM I?’, ‘I AM,’ for the Bodies x Borders exhibition?

The work ‘AM I?’, ‘I AM’ (2017) deals with social views of homosexuality in South Korea, namely the negative views perpetuated by the public protests of conservative Christian groups who have rather visibly spoken out against the LGBTQ+ community. The text on the posters comes from messages collected from the protesters’ signboards and documentary films, which have been graphically re-assembled together. South Korea is incredibly conservative when it comes to LGBTQ+ issues. The nation does not offer legal protection for LGBTQ+ citizens, who are considered second class. In addition to the lack of legal protection, LGBTQ+ individuals experience rejection and isolation from family, workplace, neighbourhood, and society in general. Since these issues have become more visible over recent years, the number of South Koreans who view homosexuality in a negative light thankfully continues to decrease, but the future of LGBTQ+ citizens’ rights in South Korea is still tenuous. These posters are a way of dealing with the protests by counter-protesting in my own way. 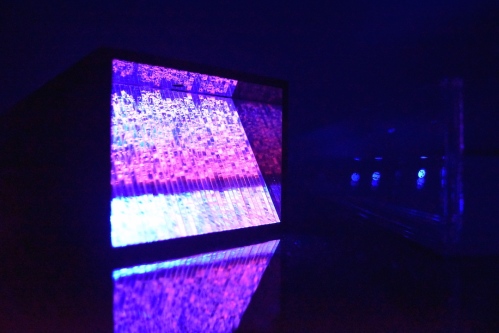 Could you elaborate on your general artistic process and what inspirations you draw from? What was the process for creating the specific work in the exhibition?

It is difficult to explain the general process, but I will say that the work mostly draws on a number of scientific and philosophical disciplines, such as molecular & human biology, gene-modification, and Buddhist spirituality. I am interested in how these disciplines intersect and become re-interpreted as visual metaphors. My main body of work is concerned with creating installations using painting with polished mediums  and reflective surfaces. I also make use of dark spaces and work with water and light. The specific work for this exhibition also involves related themes because the 21 posters come from the concept of multiplication (3×7=21). The number 3 signifies the concept of the time, which is derived from my interest in Buddhism; Buddhism perceives life, death and rebirth as a 3-part continuous cycle behind our lives. The number 7 signifies the belief that the human body regenerates itself every 7 years. I define the meaning of the number 21 by combining together the numbers 2 plus 1 (3), which refer to the 3 cycles of time. Time x human body=back through time 3x, so there is that spiritual and mathematical element to this particular work, even though on the surface it mainly deals with social commentary and human rights. 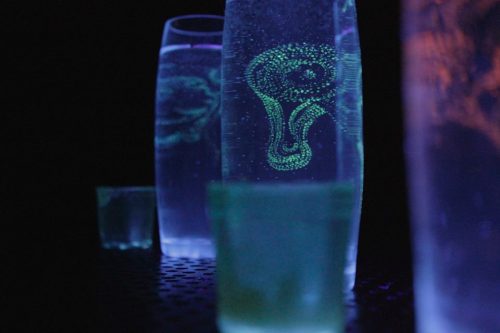 How do you think ‘AM I?’, ‘I AM’ relates to the theme of Bodies x Borders?

I think ‘AM I?’, ‘I AM’ exhibited at the Queer Asia conference 2018 is linked to theme of BodiesxBorders. The main theme of my artwork with questioning the democratic potential of our society. This work puts forward demands for inclusion and equal rights regardless of gender or sexual orientation as well as questions what is necessary for participation in social life. This theme can be expressed best in a text that accompanies the writing work, Dear my country:

‘I was born from water in mother’s womb.

I am not a mutant cell.

I am not a human hybrid.

I am not a Lesbian, not a Gay, not a Bisexual, not a Transgender.

I am just a human who loves a human.

Please, you must consider your moral and ethical questions first.’

Have you previously made work that relates to LGBTQ+ issues? How do you think your featured work in the exhibition fits with your overall body of work? Or is it in some ways a departure?

To be honest, I never thought about making artwork related to LGBTQ+ issues, because I created artwork mainly concerned with art and science, so it is somewhat of a departure. But at some point when I was abroad, I realised that I only thought about myself as a human, not with a split identity that divided queerness from humanness. After being away from Seoul for some time and returning, I would come to see Seoul Pride, where I was shocked at what conservative and religious people were saying about homosexuals with terrible messages on large sign boards. The messages were not only homophobic, also included racist and sexist messages as well. It was as if the messages on the signboards were used as offensive weapons, but I could not respond to them with my own messages at the time. So I was inspired to deliver my own message through the use of the same medium. I also thought it was important to do this work because Korean society and government and even artists rarely look at the serious problem of human rights in Korea. It was also natural for me to create the messages by poster design, because I also create work by graphic design and I used to study and work as a designer before I became a fine artist, so it was natural to address the social message this way.

It is a square, which is too big to be circle or too small to be emptiness, 2015. Mixed media. Dimension variable.

Do you have any expectations for how audiences will respond to your work? Are there any messages you wish visitors would take away after seeing your work?

Whenever I have exhibited, I felt it was more important that the main theme and structure be the most visible elements. However, when I showed this body of work internationally (England last year and Germany this year), it was more significant that the audience knew about how South Korea’s government and society deals with LGBTQ+ rights issues. I often think, “South Korea leads the world in developing smartphone technology but what about human rights?” Most people around the world do not notice that South Korean government officers and the general public often make dangerous remarks about homosexuals. In fact, the main art scene is organised by the government, so directors as well as curators in museums and galleries are not often interested in these kinds of issues, and artists are not encouraged to come out. Or, rather, if they did come out, they would not be able to work in the most established art scene. Regarding education in Korea, it is also very difficult, if not impossible, to address LGBTQ+ issues as well. So through my second home in England, I want to bring to the world’s attention the serious problem of Korea’s lack of human rights for LGBTQ+ people and also reiterate that ‘love is love’.

Bio:
Showna Kim is an artist living in Seoul, and working in England, Germany and South Korea. Her work is based on installation and extends to painting, drawing and photography also graphic design. She was studying visual merchandising and graphic design, started work in CheilWorldwide and major design and fashion companies in Seoul, South Korea. Since moving to the UK, she studied fine art at University for the Creative Arts in Canterbury and Nottingham Trent University, and then has exhibited extensively in England, Germany, Hungary, South Korea and Taiwan etc. When she visited in Seoul in2014, she was suggested to hold a position as co-director at alternative art space where she created various art projects and exhibitions with national and international artists and directors in South Korea, England, Germany, Taiwan etc. until 2016. In 2018, she has selected an artist from projects and group exhibitions in London, UK and Karlsruhe, Germany. In 2017, she participated as an artist for Numan / For Use project, ‘Tape Seoul’ (2017). She recently selected exhibitions include – Holographic Bonds, ‘AM I?’, ‘I AM’, (Middle Art Centre) Birmingham, UK, (2017); A Free Breakfast: ‘Today’s Job with Yesterday’s Tools with Future Concept’, Kunstlerhaus FAKTOR, Hamburg, Germany, (2016); Phobia, ‘Philosophy, Science And The Space in Between Things’, Waley Art Gallery, Taipei, Taiwan, (2016); ‘It is a square which is too big to be circle or too small to be emptiness’ at National Museum of Modern and Contemporary Art / Changdong, Seoul, South Korea (2015).